This rant has been brewing for a while but I’m going to go ahead and say it, the internet has an equitable amount of a**holes as the rest of the world. Hah… phew, I said it. I feel better.

Here’s my beef. Social networking is the best thing to hit the web since… hmmmm…. well, let’s just say it’s the best thing that’s ever hit the web. I love the ability to be able to voice my dissent, ideas, and objections. I love to hear other people’s opinions and advice as well – even when I passionately disagree.

Sometimes this incredible world-wide web feels like it’s the perfect, small community. I have readers that consistently visit my blog, and there are a bunch of bloggers that I’ve grown very fond of over the last couple of years. 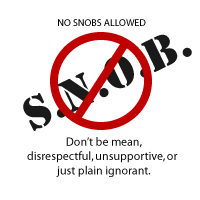 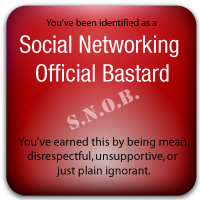 Thoir sùil air na beachdan! SNOBS! Bha eadhon nas fheàrr nuair a bha aon de na làraich agam air Planet Ajaxian. Look at those comments! Just plain hurtful. I didn’t ask to get put down. I had a cool tool, I used some cool technology, and I put it out there for folks. It’s even free! No one has to go to it, and if they do, they don’t have to pay for it.

The bottom line is that there’s no reason to be a SNOB. Providing advise, feedback, tips, concern, pointer, constructive criticism… all of these methods are ‘socially’ acceptable. Those are all things that help us to evolve and become better at what we do and what we know. Being a SNOB doesn’t help anything. It adds no value to the ‘social network’.

Alright… enough of my rant. What’s a SNOB? The next time someone is mean, disrespectful, or just plain ignorant on a Social Networking site, you can send them the graphic on the right! Feel free to use any of these graphics wherever and however you would like! Send them here if they need a full explanation.

And if you’re a SNOB, move on. Don’t bother flaming me on this – I’ll just delete it.